Is an inflammatory process that affects the gums and it is the first, reversible phase in gum disease. When plaque is not removed regularly the bacteria can affect the gums and cause irritation and inflammation presented as redness, swelling, bleeding from the gums. To avoid gingivitis, all patients need to appoint regular check-ups with their dentists and brush and floss their teeth properly.

The first symptoms of gingivitis are visible in the mouth right away. So, you will notice bleeding gums, weird taste in your mouth, swollen gums, they will have a strong red or even plum color, bad breath, receding gums and more. Sometimes the gums will bleed spontaneously, while others only when the patient touches the gums. Also, the color can vary, from a light raspberry color, red, dusky, dark red, plum and more. The size is variable. If it’s an initial stage of gingivitis, the gums will be slightly swollen. If the condition is advanced the gums will be huge. The color of healthy gums is a very light pink color, while their shape follows the form of the tooth. The gums have a triangular shape, but if they are affected by gingivitis they will change their shape and will be irregular. It is very easy to spot a person who suffers from gingivitis. The strange smell and taste come from the inflammation and the blood. When the patient brushes or flosses the gums instantly bleed. Gingivitis is, in fact, the first symptom of periodontal disease. If it’s not treated in time it will progress and it will become an irreversible condition. During this phase, the inflammatory process is only located in the gums and it doesn’t affect the periodontal ligament.

The most common cause of gingivitis is bad oral hygiene. If dental plaque is not removed regularly and properly it will cause inflammation of the gums. This sticky substance contains bacteria and if not removed it will turn into calculus with time. Plaque is usually located right to the gumline, and that is why it causes irritation and inflammation of the gums. The longer it stays the more it will irritate the gums. Shortly after, you will see all the signature symptoms. Other causes include people who smoke and drink, patients who chew tobacco, patients with a compromised immune system and with autoimmune diseases, certain medicaments (pills against epileptic seizures, against high blood pressure, antidepressants), xerostomia, poorly made fillings and other restorations, people who suffer from Vitamin C deficiency, pregnant women, women in menopause, puberty and more. 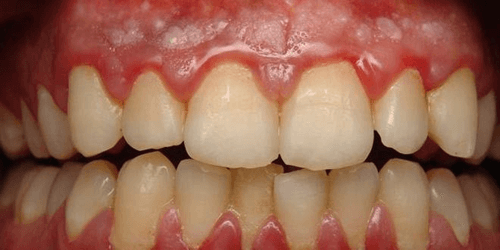 The treatment involves proper brushing and flossing, at least twice a day or after every meal. It is very important to remove all plaque. The dentist can also provide professional cleaning. If there is also calculus on the teeth, it has to be removed professionally. If the gingivitis is caused by a different reason than bad oral hygiene, that cause has to be treated also. That is the only way that the treatment will be successful and complete. For example, patients with dry mouth have to also visit a professional to take care of that condition.