The Er: YAG is a solid-state laser that has a wavelength of 2940 nm, making it a part of the infrared light group of lasers. Lasers are today a very important part of dentistry. The Erbium lasers were first approved by the FDA for use on enamel and dentin back in 1997. Since then, technology has developed a lot, and today many dental offices already own their lasers. The work with the Er: YAG laser on hard dental tissues is extremely helpful and more pleasant for patients compared to the conventional dental procedures. 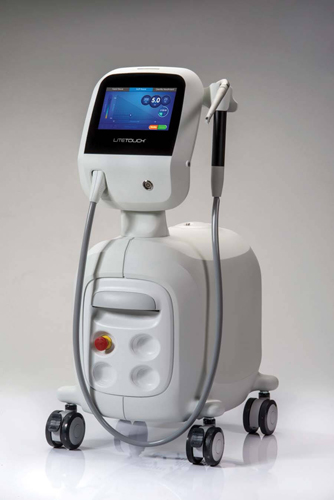 The Er: YAG laser can be used and is approved by the FDA for removal of caries, preparations, use on enamel, dentin, cement, composites, glass ionomer, removal of smear layer, implantology, endodontics, and more. Scientist are making efforts to include these lasers in many other parts and procedures in dentistry. Since the Er: YAG laser is best absorbed in water, it is used on hard dental tissues and bones as well.

So far, according to research, the Er: YAG laser is the best one in removing caries and cavity preparation. It is a very efficient tool, that doesn’t have a negative effect on the pulp when used properly. In some cases, dentists work with anesthesia in others they still have to apply anesthetic. Minimally invasive restorations are the perfect case to treat with the Er: YAG laser. Other uses include the one in endodontics. Root desensitization is one of the most common uses for this type of laser. Root canals require a clean field and that can be done with the Er: YAG. There is also the option of removing composite fillings, but materials such as amalgam and glass ionomers still haven’t been tested enough. Dental sealants and the Er: YAG laser is a perfect combination. This laser has the power to destroy bacteria located in the pits and fissures and leave a clean field. Plus it provides a great marginal closure for the sealing dental material. Pedodontics also uses the Er: YAG laser, just the same way as with permanent teeth when it comes to preparation of caries. The latest advancement for the Er: YAG laser is that it can cut bone and is more often use in that field. Periodontologists are using this laser to remove bacteria from affected roots and other surfaces. This is another new application of the laser that is further being discovered and improved.

One of the biggest advantages for patients is the minimal amount of pain. With conventional drilling instruments, removing caries can be painful. With the Er: YAG laser that pain is minimal. Another huge plus is that there is no pressure or unwanted sounds. Sometimes the sounds are the factor that really turns patients away, so thanks to this laser there is almost no sound. The procedure is much shorter, which benefits both the patient and the dentist. A lot of patients feel less anxiety when dentists work with lasers for some reasons. Lasers provide a field with less bleeding and fewer bacteria. They remove only the decayed parts of the tooth, which saves more dental tissue.

The main disadvantage is that not all dental offices have a laser. The procedure can be more expensive compared to the conventional one. Lasers don’t eliminate the use of anesthesia, plus drills still have to be used at the end to shape the restoration. In the end, the disadvantages are significantly fewer compared to the advantages and the Er: YAG is a great choice for treatment.