The dentin is a calcified tissue that contains small tubules that cause the sensitivity of the tooth since they are filled with liquid and odontoblastic endings. There is primary dentin, secondary (which is formed after the tooth erupts), and tertiary (which is formed as a reaction to external stimulations).

Dentin is a hard tissue made of both organic and inorganic substances. It is harder than cementum but softer than enamel. It is a colored substance that determines the color of the teeth. Enamel is translucent, so the color that you see comes from dentin. It is made of 45% hydroxylapatite crystals, 33% organic matter and 22% water. 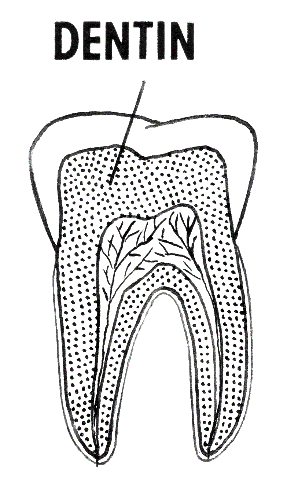 Primary dentin makes the largest part of the dentin in one tooth. It is the substance that is located both in the crown and roots. It is surrounded by enamel and cementum on the outside and with the pulp chamber on the inside. The primary type is the one created during the eruption of the tooth. Once the tooth is in the mouth and starts its function, that is the moment when secondary dentin is created. The outer layer of primary dentin is the most important one. Known also as mantle dentin, it has a significant role in the creation of secondary and tertiary one. This layer includes cells called odontoblasts that are capable to produce new dentin tissue.

Secondary dentin is the one created after the tooth has erupted. It appears only after the root is completely formed. It is created by the odontoblast cells and contains fewer minerals compared to the primary one. The newly created layers are irregular. As the years pass by, this dentin makes the pulp chamber smaller, which is why elderly people are more tolerant of pain. Young kids have large pulp chambers which have to be considered during treatment.

Tertiary dentin is produced when the tooth has to protect itself from a bacterial attack. It is also known as reparative dentin. The stimuli can be of different type, but the most common one is dental caries. So if caries has reached the dentin, but it is a chronic process and the patient has a strong immune system that can fight the infection, there will be tertiary dentin. The process can be fast or slow, which completely depends on the type of stimulus. The new layer of tertiary dentin creates a barrier between caries and the dental pulp. It has a protective function.

The main reason why dentin is so important it’s because it contains nerve endings. When the caries is still in the enamel, the patient doesn’t feel a thing. Once the decay reaches the dentin, this is the time, when patients start experiencing symptoms and pain. This hypersensitivity is because of the fact that those nerve endings in the dentin become exposed. A lot of patients that don’t have any dental caries still suffer from hypersensitivity. That happens when the enamel wears down and the dentin is exposed. It can be a result of bad habits such as bruxism or because of age.