Cleft palate is a birth defect that can affect the palate, lip, roof of the mouth or all of them.

Cleft palates are birth defects that happen during the development of the baby while it is inside the mother. For certain reasons, the structures of the mouth are not fully developed and lead to openings in the oral cavity. Unfortunately, these are common conditions and are a part of several syndromes. They can appear as a singular condition as well. Doctors notice them right after the baby is born, and in all cases they are visible. The facial structures are not fully developed which leads to a change in the physical look of the baby’s face. The first look is very unpleasant, especially for the parents, but if there aren’t other accompanying conditions, a cleft palate can be easily fixed with both surgery and other treatment options. It all happens at an early age, but the kid will live a normal life without any limitations. If the cleft palate is a part of a syndrome, the end result depends on the other involved conditions.

The first symptom is an obvious facial deformity that can look several different ways. This is because there are different types of cleft palates which affect several parts of the oral cavity. Some are less visible, while others come with larger gaps both intraorally and extraorally. There can be an opening on the lip and roof of the mouth, only the roof of the mouth, lip and the bottom of the nose, the soft palate and more. It can happen at only one side or be a bilateral condition. It is much more common on the maxilla compared to the lower jaw.
Functional symptoms include difficulty with speaking, eating, chewing, swallowing, infections, ear conditions, breathing and more. Young kids are most affected by the appearance, and that is the biggest problem for them. Thanks to the advanced surgical procedures, most of the cases are treated with minimal scars.

This is a condition that is genetically transferred. According to scientists, cleft palate can also be caused by a number of environmental factors. It all happens during the second and third month of pregnancy when the oral tissues are supposed to fuse, but due to some changes they don’t and there is a gap noticed right after birth. There is no method that will help in finding the exact reason that caused this condition. Some of the risk factors include smoking, drinking, drug abuse during pregnancy, genetics, radiation, exposure to metals, diabetes, obesity and more. 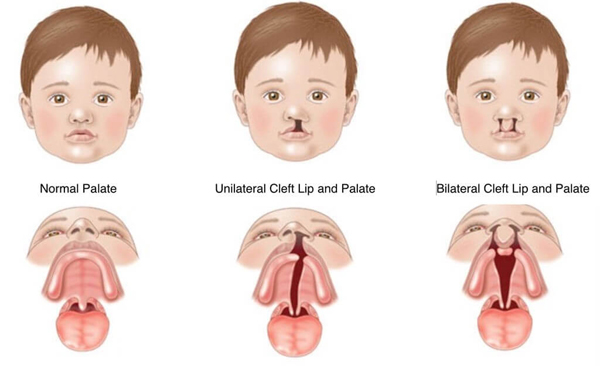 The treatment process is long and complicated. There is a special team of doctors that are included in treating a cleft palate. Some of them are a maxillofacial surgeon, oral surgeon, orthodontist, psychologist, general dentist, pediatrician, speech therapist, otorhinolaryngologists, plastic surgeon, social workers and more. The treatment starts with a plan that is spread over a longer amount of time. For most patients, it takes years to treat every single aspect of the condition. The road to recovery is also long. Since it appears at an early age, a lot of kids have difficulties and need counseling to help them go through the situation. The easiest cases are of course treated much faster and affect the facial appearance very little.