Dental amalgam is a material that was used very often in the past. In dentistry, amalgam is a combination of mercury and other metals such as silver, copper, zinc, tin and more. It is probably the most popular dental material ever. There are dentists that still use it mostly because of its great characteristics and performance. One of the reasons why amalgam is often replaced with composites is the dark color and bad aesthetics. It has the ability to go under a lot of pressure and it is also very affordable. The only concern about the amalgam is mercury. The FDA marked it as completely safe, so there is no need to be worried.

Dental amalgam is a mixture of mercury with a metal alloy. Different brands that produce it include different proportions of the separate metals. The main ingredient in metal alloy is often silver and also includes copper, zinc, tin, mercury and more. People often refer to amalgam fillings as silver ones. The mercury is used in the composition because it’s an element that can connect all the metal ingredients and create a material that is first soft and can be placed in the prepared cavity. Once it is, the dentists will press the amalgam into the cavity and the material hardens. Scientists experimented for quite a long time, and tried to find another metal that can do the same thing as mercury, but failed in the attempts. So mercury is still the most important part of the dental amalgam.

In the past, amalgam was the most used material for dental fillings. Dentists used it for many years, until the discovery of composites. The first ever documented cases of dental amalgam date back to the 659 year. The widespread use started in the 1800s when dental amalgam became the only material used for fillings. 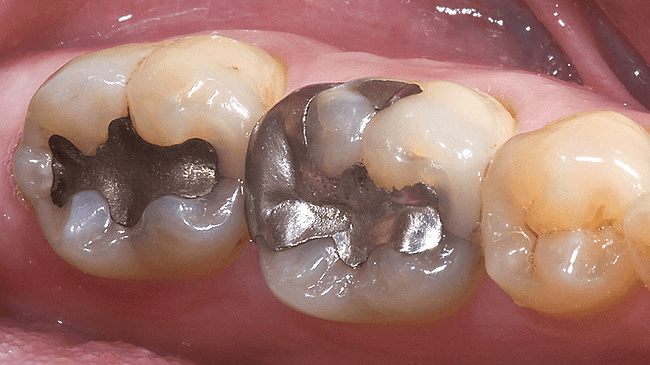 There are a number of positive characteristics that make amalgam such a good material. First of all, it can withstand a lot of pressure, especially the one produced by masticatory forces. That makes it an ideal material to use in the posterior region. The cost is very low, and it’s affordable for both doctors and patients. Also, the handling and application are very simple. In the beginning, dentists had to mix the mercury and alloy in special mixers by hand, but these days, plenty of brands offer automatic mixers with dosed capsules, so there is no place for a mistake. Another huge pro is the durability. There are still people that have amalgam fillings in their mouth that have lasted for over 20 years.

The main reason why dental practices don’t use amalgam these days is esthetics. Unfortunately, this material has a blackish color with a silver shine to it. It does not satisfy the aesthetic preferences of most patients. The ones that still use it, place it on posterior teeth. There are also several studies that examined the effect on metal alloys and mercury on the human body, but the FDA has placed amalgam on the safe list, so patients shouldn’t have any worries.