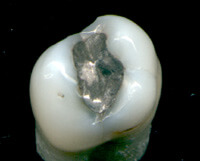 There has been controversy over a type dental filling.

Some say this dental filling is toxic because it has mercury.
Yes. Mercury.

Is this the element that pollutes the environment and the reason we don’t eat seafood that’s been contaminated by it?

Let me give you a bit of an idea of the dental filling we’re talking about.

This filling is called dental amalgam, where 50% of it is mercury.

Want to know if you have those in your mouth?

Go to the mirror now and open your mouth, if you see silver / gray fillings, particularly at the back teeth, that’s probably it.

If you think you have toxic stuff in your mouth right now, don’t panic.

Let’s take a step back and check out both sides of the argument. It’s important to see the ideas from both sides.

There are research supporting and rejecting the use of amalgam. We’ll take a look at various viewpoints of those supporters and critics, within the context of today’s culture.

Dental amalgam might have first been used by the Chinese as early as 659 AD. In Europe, these fillings were used back in the 16th century.

In modern dentistry, dentists have been using this material for more than 150 years. Throughout the years there has been “amalgam wars” and controversy over the mercury content, but the use of those fillings persist.

The reliable performance of dental amalgams in load bearing situations and low cost is unmatched by other dental restorative material. Especially when patching the back teeth, dental amalgam was a no-brainer.

We can note that there are mercury vapor released from silver fillings. But whether amalgam poses a real health risk is still not known for sure.

The questions we should ask is: Does enough mercury escape from amalgam restorations to cause adverse health effects?

The answer? The evidences were not sufficient to deem amalgam as dangerous to the human body and to refute the use of amalgam.

#1: Once the reaction is complete, less amount of mercury is released, that is far below the current health standard

#2: Mercury does not collect irreversibly in human tissues.
The average half-life of mercury is 55 days for transport through the body to the point of excretion. Thus mercury that came into the body years ago may no longer be present in the body

#3 Mercury acts as bacteriostatic agent. Since there are so many bacteria in the oral cavity, being able to resist bacteria is an important characteristic..

Once again, there’s nothing to worry about dental amalgam. But don’t take my word for it, this is not just my opinion.

ADA
“ The scientific evidence supports the position that amalgam is a valuable, viable and safe choice for dental patients.”

FDA
“While elemental mercury has been associated with adverse health effects at high exposures, the levels released by dental amalgam fillings are not high enough to cause harm in patients.”

At the end of the day, all comes down to this: being practical. Practicality being that sweet spot between totally abandoning the material and relying on it entirely.

So…what does all this mean to you as a patient?

What to do if you currently have amalgam in your mouth

Some people in the “holistic dentistry” circle have in fact successfully convinced a number of individuals to have perfectly good amalgam fillings removed to be replaced with composites. No need to purposely remove it, removing it is even worse as the process of removing produces more mercury vapor into environment

The removal of amalgam fillings is not recommended for reasons other than a true hypersensitivity to Mercury. Mercury allergy is rare but sometimes hypersensitivity to it may lead to dermatitis most often affecting the skin as a rash. This affects a very tiny subset of the population.

We live in an age of choices. Knowing the choices you have for fillings a good place to start with.

Though amalgam have no harm to the body, there are benefits of using other materials, Nowadays the focus is on aesthetic dentistry, and the use of tooth colored fillings is on the rise. If your dentist can offer an excellent quality tooth-colored filling to ensure long-term sustainability, I’d say go for it. If not, we can always fall back to good old-fashioned amalgam.

With much improvements in other dental materials such as composites, those can also be a viable option to be considered. Consider dental composites if the filling is visible when you smile or talk, they’re great for aesthetic purposes.

There will always be people with opposing beliefs. Those who are against dental amalgam are seemed to be also “naturalist” and “holistic”. It’s just speaking to a different audience. The scientific community as a whole still believes in the usage of the silver filling.

So let me summarize and review, though some people have the misconception that dental amalgam is unsafe, evidence has shown otherwise. In fact, they’re very safe and have practical use in the field of dentistry.