Gingival recession or receding gums happens when the gums are retracted and the root of the tooth is exposed. Recession is a very common oral problem and there are many factors that can cause it. Those factors include periodontal disease, trauma to the gums, very aggressive brushing, using a toothbrush with hard bristles, teeth grinding, improper oral care, abnormal tooth position and more. This recession happens in a longer period of time. The symptoms include hypersensitivity on hot and cold, exposed roots, teeth that appear longer, tooth mobility and more. The treatment depends on the cause. It usually requires both conservative and surgical measures.

The symptoms are visible. In other words, you will see exposed roots of the teeth that suffer from recession. In the early stages it is barely visible, but in the more advanced it can be really progressive and you can see the whole root. The roots are very sensitive, so the patient might feel pain when consuming hot and cold drinks. Other symptoms include mobility of the teeth, frequent cavities below the gum line, a very sharp, intense pain, discolored teeth and more. The cavities appear because the cement on the roots is a softer tissue compared to enamel, so it is more vulnerable to acids from bacteria. It also has a darker color, so that is why the color of the teeth will appear yellow. Teeth will look significantly longer. Bleeding from the gums, swollen gums and bad breath are also symptoms of this condition. 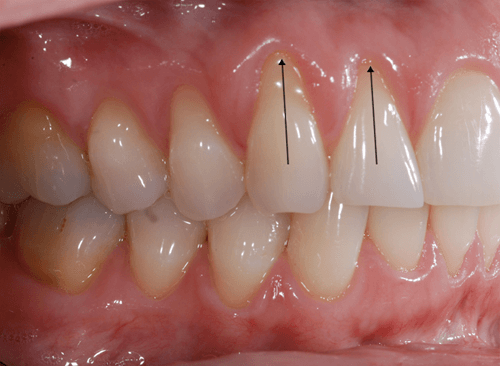 The first cause of the gingival recession is the periodontal disease. This is the most common oral problem, which leads to a number of other conditions. So once the disease has progressed to a certain point it will result in gum recession. So you can feel free to say that recession is a symptom of periodontal disease. Another common cause is an improper brushing technique. If the patient uses a brush with hard bristles, plus doesn’t know how to properly move the brush, they can damage the gums and cause a gingival recession. Improper flossing can lead to trauma of the gums and the periodontal space, also causing a recession. That is why patients have to be properly educated in all of this to prevent unwanted damage. Horizontal brushing is something you should stay away from. Some people are genetically predisposed to have a thinner gingiva, and they are more exposed to recession throughout their life. Several general diseases such as scurvy can also lead to a recession. Traumatic injuries and bad habits are among the numerous factors. 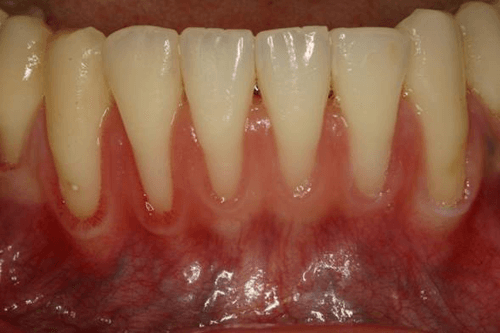 The first thing the dentist has to do is find out the reason behind the recession. If the cause is a periodontal disease it has to be properly treated. If the cause is brushing, the patient has to learn how to brush. Once the gingiva has retracted it won’t come back to its previous location. To do that, the patient has to consider getting periodontal surgery and gingival grafts. The tissue, unfortunately, doesn’t regenerate, so the surgeon will have to harvest it from a different place in the mouth or use flap techniques to cover the defect.